The Class of 2019 demonstrated outstanding academic accomplishments with an admission rate of 89.51% from the University of Toronto. Among the graduating students, many have been admitted by first-class tertiary institutions around the world, such as University of California (USA), University College London (UK), University of Manchester (UK), University of Waterloo, McGill University and Queen’s University. In the coming fall semester, they will start to pursue their first university degrees in various academic disciplines like computer science, mathematics, chemistry, engineering and commerce. Approximately 81.63% of NOIC graduates have received diverse scholarships amounting to $2,171,500 in total. An IB student was granted with an award worth $80,000 by the University of British Columbia, thanks to her successful completion in the IB studies. Overall, the Class of 2019 graduated with 100% university admission rate, the average number of offers per person being 9.38.

At 9:30 a.m. on June 5th, staff members and students of NOIC Academy entered the Hart House in an orderly manner. Accompanied by the Canadian National Anthem performed by the school music club, the graduation ceremony officially commenced.

Roy Huang, CEO and President of NOIC Academy, delivered an opening speech, in which he highly recognized the outstanding achievements of the Class of 2019. He also introduced the latest NOIC Online Education serving over 1000 registered students. Mr. Huang demonstrated the favorable outcomes of the worldwide educational events hosted by NOIC Academy. In the meantime, he appreciated the commitments and contributions from the school staff members. He also encouraged all the graduates to integrate both Chinese and Western cultures to become innovative and intellectual elites in the tide of globalization.

Jeffrey Beard, Chairman of NOIC Advisory Board and former Director General of IBO, presented the key-note speech at the ceremony. In his remarks, he pointed out that NOIC students are provided with an excellent educational platform. He inspirited every student to cherish this opportunity to improve themselves by taking full advantage of such first-rate educational resources. Mr. Beard congratulated every graduate and wished them all the best in their future endeavors.

Here are the videos conveying congratulatory messages from Tony Little and Ann Puntis.

Following greetings from the guests, the IBDP graduation ceremony started. After speeches were given by Principal Tim Yawney and IB coordinator Pavle Milutinovic, IB diplomas were issued. The IB students all made great achievements this year, with each student receiving an average of more than ten offers of admission from top universities around the world. Among them, Xinrui Liu won a scholarship of $80,000 from the University of British Columbia. Compared with the OSSD program, the IB program truly offers more enrichment opportunities.

Next, the Ontario Secondary School Diploma (OSSD) were granted by Mr. Roy Huang, CEO and President of NOIC Academy, Mr. Tim Yawney, Principal of NOIC Academy and Mr. Jeffrey Beard, Chairman of NOIC Advisory Board. Photos were taken with every mentor group.

Then came an amazing chorus performance of school music club, accompanied by a melodious piano pieced by Jiachen Ding.

At this time, the Award Ceremony started for outstanding IB graduates, OSSD graduates and the students with top grades from Euclid Contest, Sir Issac Newton [SIN] Physics Exam and Chem 13 NEWS Competition. Congratulations on their remarkable performance and NOIC Academy is proud of them!

Diana Li, now a second year Engineering student at the University of Toronto, was invited to attend the graduation ceremony of NOIC Academy this year. In her speech, she inspired graduates to face up to challenges at university, where they would experience a hardworking and fulfilling life.

The speech from Mr. Tim Yawney brought the 2019 NOIC Academy Graduation Ceremony to a successful conclusion. 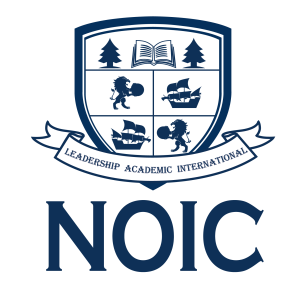